It has been one of those weeks.  I worked too many hours and don't feel like I got anything accomplished.  When I get stressed I start doubting everything.  I was halfway convinced that I am ruining the little Stinker.  We were looking more like a saddle seat pair than a dressage pair.  Not what I am aiming for.  Luckily I have a fantastic support system in S and D.

(He decided legs touching him were bad...)

I made S get on him for my lesson on Wednesday.  He was the same with her as he was with me.  Although I wasn't impressed with his antics it did make me feel better that it wasn't just me.  It was a confidence booster that I needed.  I sent D the video and she gave us some tips to get the little turkey out of his head and back to where he was focusing.

I haven't ridden him yet, but S rode him today.  She said that he was super ADD when she was lunging him and she thought it was going to be another rough ride.  When he got stuck (like in the video) she would take his nose toward her knee and send him forward.  This way he can't bolt but it gets him out of the prance.  She said that he was really good and she got some nice stretchy trot at the end.  I guess I will see how he goes tomorrow. 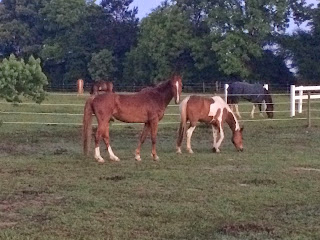