So...I am apparently terrible with technology.  Not surprising since I regularly manage to make equipment go on the fritz at work but that is another story.  I was out of town for a conference and I thought I had things set for posts to be posted....they did not get posted and now I can't seem to find them.  Oh well I will just have to rewrite everything.

So the short version is Stinker has been off.  Not truly lame but something hasn't been quite right.  I have been trying to decide if he got trimmed too short or if something is really wrong.  He had about a week off when I left and when S got back from a show she lunged him and thought that he looked better.  She rode him today and he was really good.  I mean really really good...he walked for about 20 min which is unheard of.  I am a little jealous it was for her and not me. 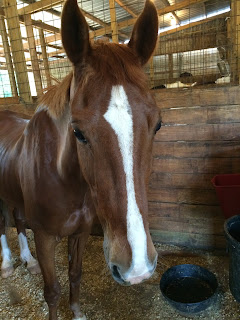 In the mean time I have been picking up some rides on Pongo.  He is a super cute off the track thoroughbred.  He hasn't had a lot of retraining rides on him, but he is a good horse.  The first day I rode him, he felt super funky.  I guess I have gotten spoiled how smooth Stinker is.  Also he spent most of the ride trying to drift towards the barn (which he couldn't even see).  He was either throwing his shoulder out and trying to drag or dropping it and falling in.  It was rather frustrating since he pretty much ignored my legs at the beginning.  I ended the ride when he started responding.

The second ride on Pongo was fairly similar.  This time I was in the dressage ring and he was dragging towards his pasture.  He would fall in on the one side and try to run out of the arena on the other.  It took less time to get some semblance of straightness but it was still the majority of the ride.  On the bright side it was a shorter amount of time and he didn't feel quite as funky.

The third ride on him I had a different problem.  He was easy to keep straight (YAY!), but he was really behind the leg.  The walk was sluggish at the best and the trot was more like a western jog.  I tried cantering him to get him in front of my leg, because I thought if I could get him up and push him forward then bring him back and push him forward again it would translate into the gaits.  For an ex-racehorse, he wasn't really into the whole cantering thing.  I could get some nice extension on the long side but every time I brought him back he wanted to drop into the trot.  I had to be really strong with my seat to keep him in the canter but it work so I was pleased with him.  Unfortunately it didn't carry over quite as well as I hoped.  I could get about half a circle of a nice trot before it got sluggish and behind the leg again.  No amount of leg could fix it.  I ended with some nice trot and made him do some ok walk.

My jump lesson on Charlie was rather interesting.  He was super forward and was locking on to any jump he could see.  When we were doing flat work to start I could feel him lock onto some jumps and he would try to drag me to them.  This was really apparent in the canter and the steering didn't feel like it was quite there.  When we were suppose to be trotting the small cross rails it was a struggle to keep him from launching into a canter before the jump.  My position was terrible mostly because I forgot all about myself in my attempts to control the speed.  I am doing a better job of feeling when he is going to take off.  That is about the only positive thing I have to say about my riding.  He is a pretty awesome horse because he only stops when I accidentally half halt him too much that he gets confused.  Otherwise he is going to take any jump you point him at. 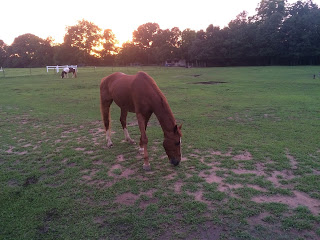 It is really hard to get a picture when he won't stop trying to eat. 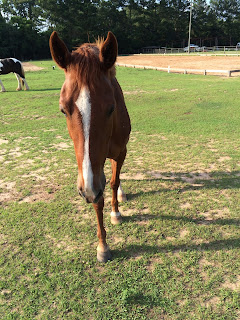 Or stop following you


Posted by EventingSaddlebredStyle at 10:03 PM