Stinker got his first massage this weekend and it was amazing!  I am ignoring the fact that he was a total asshole to ride on Sunday (I think he was feeling better and that was the source of the assholery).  The masseuse, Amanda Moretz, was really awesome to work with.  She is based out of Atlanta and here is her Facebook page. 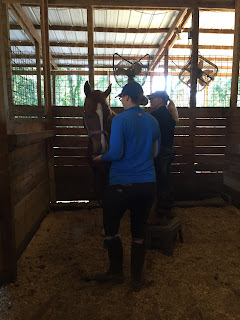 The sad lone picture from the massage

The beginning was pretty standard, the history of the horse and what we want to do and so on.  At first Stinker was not sure about the whole massage thing and was doing his best to distract himself by chewing on everything.  After awhile he started to relax and focus on Amanda.

She mostly focused on his hind, which was very tight.  Basically everything that she focused on was due to the EPM and fairly typical of EPM horses.  I was actually very excited to find out that she has worked with a number of horses that have had EPM.  Below is a picture of the chart she drew up.  The hatch marks demonstrate the areas that were tight. 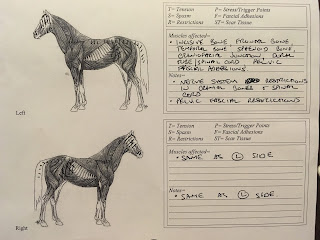 The notes from Amanda.

His hind end and nervous system were the problem areas.  He had a lot of fascial restrictions in his pelvis.  He was also very restricted in his head (and was less than pleased with having to focus on that area).  I was really excited that he was really balanced (yay for actually getting him straight).  Obviously from his muscling we still have corrective work to do, but we are on the right track.  My favorite part of the whole thing was towards the end.  Stinker gave two huge releases where he puffed his neck up and did a giant whole body stretch.  I failed at getting pictures of them, but it was awesome.

I really hope that Amanda keeps coming back, because I loved how all the horses responded to her.  One was literally hanging on the cross ties because he was so relaxed.  She also does clinics where she teaches owners some of her tricks (I am really hoping we can get one of these scheduled). 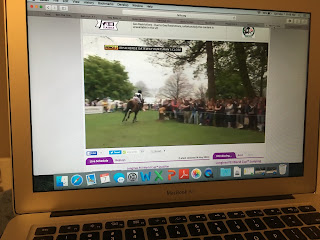 In other news, I got up extra early this weekend to watch Badminton #lovemichaeljung
Posted by EventingSaddlebredStyle at 3:00 AM