One of the ladies at the barn very kindly agreed to let me borrow her horse for a few jump lessons this fall while she is traveling.  Since she ended up being gone during the clinic with D (she had been planning on riding in it), I asked if I could steal Blue for a lesson. 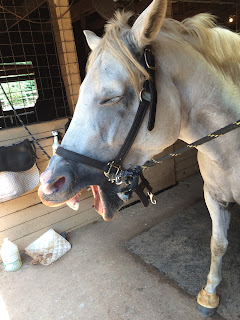 Blue in all his glory

Blue is a total doll.  He is a draft quarter horse cross, so he rides totally different from Stinker.  I had ridden him twice before.  Once on the trail ride where I ponied Stinker and once when I was jumping.  We might have gone through some fences instead of over, because if the rider isn't committed Blue decides it isn't worth the effort to jump.

Poor Blue did not know what he was in for.  In the beginning he was super lazy and had the well I don't think I feel like moving off your leg thing going.  I popped him with the whip a couple times and the first time he went "hey my mamma never does that!" and flipped me the bird.  The second time I got more of a yes ma'am (like the good southern boy he is). 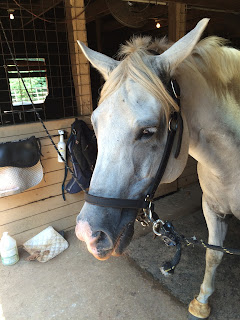 He is pretty darn cute even if my pictures are crappy

My respect for his owner grew enormously when we started to canter.  Blue is a little sluggish with his hind and his canter gets a bit four beat.  D had me rhythmically tap his inside hind with the whip to get that snappier.  I was surprised at how much it changed the canter.  But holy crap he takes a lot of leg to keep him jumping and packaged, not to mention testing my coordination by keeping time with the whip.  I was seriously questioning my life choices, but who needs to be able to walk... 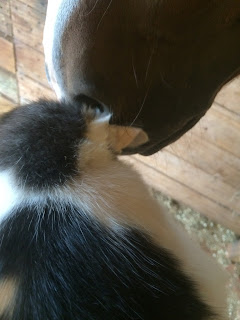 Overall, it was a really good lesson for me, because I was able to work on my timing on something that is slower than Stinker and doesn't demand quite as precise of a ride.  The next day, my timing was much better with Stinker.  I am very thankful for my awesome barn people that let me steal their horses when they are out of town.
Posted by EventingSaddlebredStyle at 1:00 AM