I realized three weeks into August that I forgot to take pictures for the monthly conformation progress. Oops. I guess 8/9 is pretty darn good.

Lately I've been feeling a bit discourage.  We've forgotten how to bend left, he looks like he is losing a bit of weight, and I'm frustrated with my riding.  That being said I was pleasantly surprised by one set of comparison pictures.  So without further ado here are the shots in comparison to February (bottom). 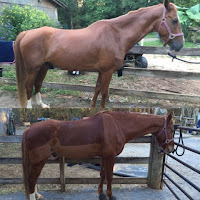 He did not want to cooperate with the pictures, so he looks a little wonky, but you can see how his neck is starting to fill in at the top.  He still has way too much under neck, but at least there is some upper to go with the lower now? 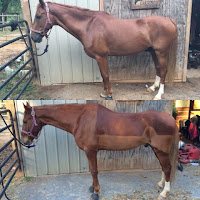 He is slowly gaining in the top line department and I think his loin/back area is looking stronger.  I like the progress, but I also get a bit over whelmed at the amount of progress we still need.  Can I just fast forward through the building stage and have a hunky horse?  Oh yeah the hunks weren't in the budget... 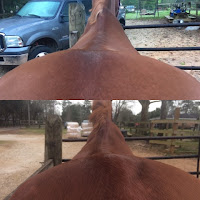 This is the one I was surprised about.  Stinker has a long history of bracing through his left shoulder and letting his haunches trail right.  This has been a problem for him as long as I have known him (even pre EPM).  In the February picture you can see how his spine actually curves to the right.  It isn't the way he was standing, that is just how it looked.  In the top part, you can see it is much straighter.  This didn't require any extra maneuvering on my part.  This is why I love dressage!