Sunday, Stinker and I had our final lesson.  Typically, I give him a long warmup because I have found this keeps his brain in better than when I rush into the trot.  D had us walk and move right into the trot and I was expecting more trot work but then she told us to canter fairly early on.

We struggled a bit this time around.  To the right, we kept getting the left lead (happens often) and poor Stinker was getting more and more wound up about cantering and trotting and cantering and trotting.  I could feel things getting uglier and uglier.  His trot was getting more up and down and he was sucking back behind my leg a ton.  I think the issue was two fold.  One my hips were tight after the two lessons the day before and two since the warm up was shorter he wasn't quite as settled into his work. 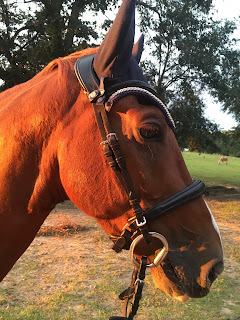 I was really happy that even though I could tell he was getting a bit fried, he never really lost and he kept trying.  I finally asked D what part I was losing because I couldn't readily tell from the cues she was giving me.  She was actually having a hard time identifying things because his trot was getting funky from all the tension and she thought it was the left shoulder.  Once I had that info instead of worrying about everything I just focused on keep the left shoulder straight and asked for the canter and we got it. 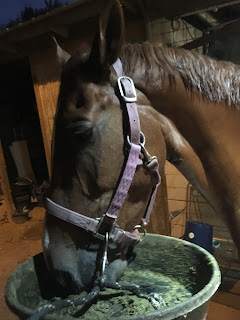 He has me well trained

He did do his scoot/baby bolt into it, but he came right back to me in maybe two strides.  I am totally ok with it considering his frame of mind.  He was a more rigid than the previous day, but again that was to be expected.  I was really happy that he let me move his shoulders around.  I was actually really happy about this minor meltdown, because now I know how to work through things.

The other side was fine, it was better than the right but not as good as the previous day.  Then D wanted to get back on him.  He was really good for her, but he was also pretty tired.  He was trying and just didn't have the oomph to quite give her what she wanted.  So she let him be done.  The poor guy was totally drenched in sweat (it is still pretty hot) and was actually puffing a bit.  I hosed him off and gave him a liniment bath. 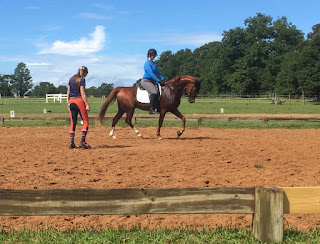 The sad lone picture of the weekend.
Posted by EventingSaddlebredStyle at 1:00 AM