Friday we left for our first schooling show.  I really wasn't sure what to expect and was trying to keep my crazy to a minimum.  It was a struggle.  I was excited but also very nervous.  It is about a six hour haul to the schooling show.  My original plan was to go out in the XC fields and school him while the group (we had 8 horses) schooled XC.  I realized this was a terrible idea and ended up staying at the barns and schooling him in a ring (not the show one). 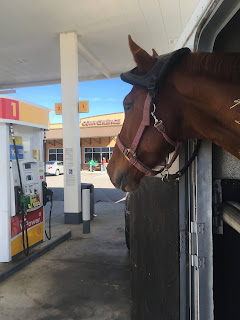 I think he is ready for a poker tournament.

He was really good for the schooling.  There were four or five other horses in there with us and he handled things well.  I thought about lunging him prior to getting on, but didn't.  I did let him circle the mounting block as I got on, because it was easier than picking that battle.  He knows how to stand but when he gets anxious standing gives the hamster more time to get wound up.  I only rode him for about 30 minutes.

Saturday, I didn't ride until 12:50 which meant all of the other girls were doing stadium when I was doing dressage.  Unfortunately that meant S was busy (she was riding in the same division as two of the girls and there was a third right before her) and so I was on my own for warm up.  She was originally going to try to come and check on me, but I told her not to worry about it and just to check her phone and I would text if we were having a meltdown. 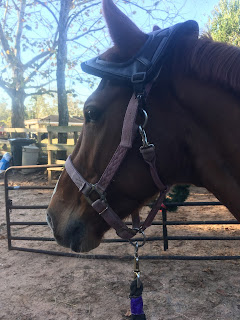 Warm up started off really really well.  I had him walking nicely and supple and moving off my legs really well.  He lost it a bit once we trotted and I never got it back.  It was pretty obvious that I was having difficulty steering and most people were giving me my little circle at the far end of the ring.  Except one person that thought cantering a circle around my circle was a great idea.  That resulted in me going off on a rant about why the hell someone is doing intro A and Stinker doing some unintentional cantering that was pretty darn close to bolting.  After that I would get him settled and the pain in the butt would blow by us again and Stinker would get tense again.

I was happy with the test.  We are both capable of more, but we made it through and he handled the whole environment as well as he can at this point.  There was nothing in the comments that I don't already know.  We got told we needed to walk sooner (I barely got him back to the walk by the time we hit C and I had started asking a few strides before X).  Several tense comments (yep we looked like a gingeraffe.  Only one jigging comment (it was the free walk).  I had to chuckle at the halt.  She wrote, "haunches right ears left."  I was laughing in my test at that point because I was trying to hold him straight and he really really really wanted to see what was going on in stadium. 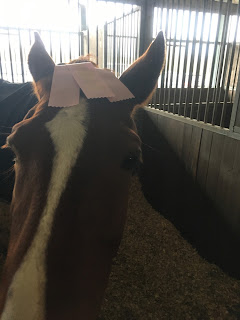 As far as the collectives went, we were dinged for the tension (5.5 on gaits, 5.0 on impulsion, 4.5 on submission).  I was pretty darn proud of the fact that we got a 6.0 on geometry considering that as I was finishing my second circle, I thought, "crap I have no idea if my circles have even been circles."  At first I was bummed that I got a 4.5 on "Rider's effectiveness of aids" but after watching the test I realized I was riding far too passively.  On the first circle he kept trying to canter and instead of really sending him into the corners and using my shoulder in or haunches in to break up the tension I took my aids off.

It was a great learning experience for us and we finished with a score (and a 5th place ribbon).  I officially bought him just over two years ago and we have gotten through a ton of baggage and EPM and I couldn't be happier with my little Stinker. 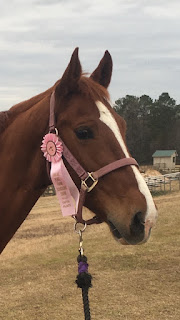