Putting It Back Together

Since Stinker's meltdown on Tuesday I have been trying to put things back together.  He still starts off totally convinced that he can't possibly bend or move off my leg.  He is much more up than he has been, mentally and in all actuality.  Seriously this horse has a very long neck but he can tuck his nose and either curl or shove it straight up in the air and make the neck disappear.  Another fun thing is whenever he gets anxious or nervous like this he gets a lot more front end action.  So. much. front. end. action. 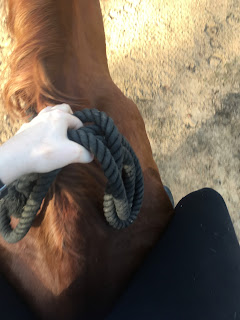 Despite the rough starts, he is still trying for me and Wednesday and Thursday I got some decent work from him.  Wednesday actually started off fairly well.  I walked him up and down one hill for about ten minutes and he settled nicely and was working fairly well.  I walked him further away from the barn and he started getting more and more antsy.  I walked him up to the dressage ring and he settled.  I got off and lunged him and he was really good minus when the outbacks (pasture boarded horses) were being chased because they had gotten out.  I really couldn't blame him for that, he couldn't see what was going on but there was lots of yelling and galloping. 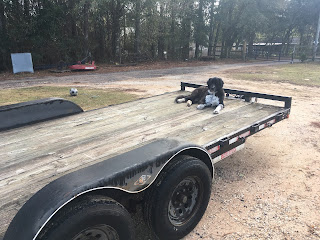 He was surveying his kingdom

After lunging him I got back on and walked him for another ten or so minutes.  He was fairly distracted because horses were still running, but he was stretching and bending so I called it a win.  Thursday, I had a lesson with S, but decided to follow the same warmup of walking on the hills followed by lunging and then riding.

Of course I woke up late on Thursday so I was pretty frazzled when I got on.  Of course it immediately transferred to Stinker and he lost it at the mounting block.  I was on, but he wouldn't stand and was doing his lovely inverted piaffe.  I never really got him truly settled but I kind of gave up at good enough.  On the lunge he was great again (maybe in another three years he will look like that under saddle).  I thought I saw some funny steps, but S said I was being nuts.  She totally right, but it still makes me anxious. 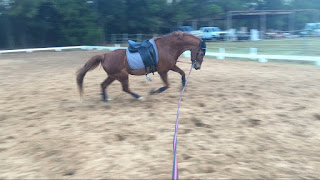 At least his transitions are uphill...

Once I got back on him he was pretty good.  We did some pole work and for the most part he stayed with me and didn't launch over the poles.  It was still a struggle to get him straight, but when I did he went nicely.  Of course those moments were few and far between.  I didn't do a ton of work with him because he was pretty hot.  I hosed him off and of course he went and found the sandiest spot and rolled (both sides too).  Good job Stinker.  He is getting today off and then I will reassess his mental state.
Posted by EventingSaddlebredStyle at 5:24 AM