Back in December I decided to try acupuncture for Stinker.  At his first appointment he was quite reactive.  He wasn't great the first time he got a massage either, so I decided to give it another shot and three weeks later he had his second appointment.  For the second one he was sedated and was still quite reactive.  I hadn't felt a difference, but it is really hard to tell with him since there are so many variables to consider.  The vet that does the acupuncture was pleased with the changes in his shoulders.  To be honest, I couldn't tell a difference but I stare at him daily and I decided to take her word for it. 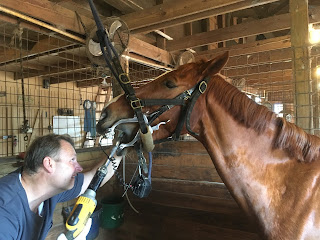 I can't seem to remember to take pictures of the acupuncture so here is the dental instead...

He had his third appointment on Wednesday.  I had decided that if he wasn't more settled this time that I would write acupuncture off as not for him.  Luckily she had attended another course between the second and third visit and had asked the instructor what the hell to do with him.  The instructor suggested that maybe his front was just too sensitive and to start on his hind end specifically around the feet.  There are specific terms, but I don't trust myself not to mess things up in my explanation.

The vet was a little unsure because typically when a horse is overreacting to things the hind end is the last thing you want to be messing around with, but she decided to give it a shot.  Surprisingly, he was relatively well behaved.  There was his typical "I'm nervous and unsure about this situation" behavior, but there wasn't the attempts to push through the handlers.  Nor the I really want to bust out of these cross ties behavior. 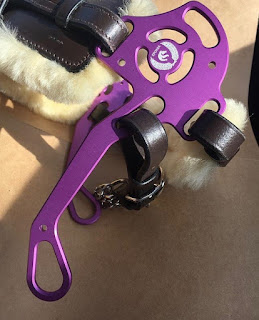 After she got the needles in his leg and one in his back, she wanted to try moxa (moxibustion) and this is where things got a little weird.  Moxa is dried mugwort and it smells a bit like pot when it is burned.  It is used to warm certain spots and stimulate circulation.  It can be held to the needles to warm them or just held over the spot.

I was pretty skeptical but figured since I was paying for the session I may as well roll with it.  It wasn't like it could harm anything.  It was really interesting to see him relax and start chewing.  He actually looked a little sleepy (which is pretty unheard of for him).  I am curious to see how he will feel.  In addition, he got two shots of B12 behind his ears to see if that will help his little hamster brain.  I am really excited to see how he does today. 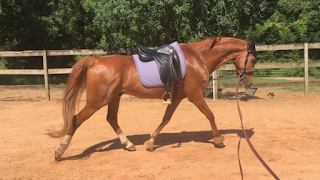 Hopefully he will have his fancy pants on and a brain in his head
Posted by EventingSaddlebredStyle at 1:00 AM