I had another fabulous lesson this weekend, but I realized my perception lies to me frequently.  And by frequently I mean ALL THE DAMN TIME.  I realized by glancing in the mirror when I think Stinker has his head really low, it is about the max I should allow it to be.  I am still weighting my right seat bone too much and collapsing through that side.  My concept of me sitting upright is improving but I still lean too far forward.

It is really interesting and annoying at how much my body lies to me.  But I also have plenty of things to work on this winter.  Hopefully I can make some improvements in myself over the winter and by next spring they will be my new habits.

The sunset plus fresh snowcapped mountains was stunning

I continue to be amazed at what a trooper Stinker is.  I had ridden him Wednesday morning before the storm came through.  It started raining on Wednesday and continued through Thursday evening.  Friday was cold and everything was sloppy from all the rain so I didn't ride.  Then I hauled out to my lesson on Saturday.  The indoor was super busy.  There were jump lessons, other dressage lessons, plus people riding on their own all happening.  I really haven't ridden with Stinker with much traffic.

He started off really nervous, but after a few circles he took a deep breath and went to work.  Trainer was so impressed, because she saw him not wanting to stand at the mounting block and being anxious to start.  Mostly we worked on me maintaining the contact and not throwing it away when he stretches for it.  I was rewarded with some really consistent trot work when I maintained the connection.  Funny how that works. 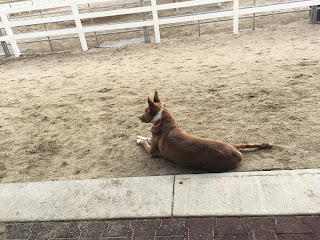 We even did a tiny bit of canter the one way and holy crap it was good.  The rhythm was there, he was balanced, didn't zip off, and came right back to the trot.  I really wish I had it on video because one of the ladies that was riding was watching (I think she was watching because I made her nervous when I said he likes to get zippy) and said "Oh he is so cute!"  Which honestly I think that might be the first time I have heard that when riding.  Another lady was asking me about him after my lesson too. 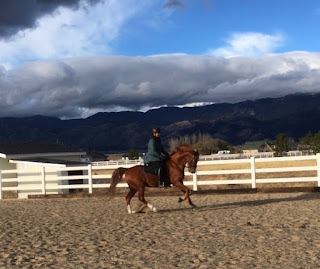 It felt way better than that

I had to laugh at the end of my lesson Trainer was talking to me about how he was just too tense still and was asking me about things I have done to try to get him to relax more.  His tension has decreased so much that I am fooled into thinking that he is relaxed.  Which in comparison to what I started with he has relaxed, but I do agree that there is still improvements to be made.  I will admit I did have a moment of "Seriously?" before I acknowledged that yes he has improved but there is still progress to be made.  Those darn lies will get you every time.
Posted by EventingSaddlebredStyle at 1:00 AM