In the lesson last weekend we kept plugging along and working on getting him more consistent in the trot and started touching on transitions.  Stinker's idea of a transition is dropping his back, tossing his head up, and flinging himself into an up transition.  I have known all along that this is problematic, but I didn't have him mentally squared away to address the issue. 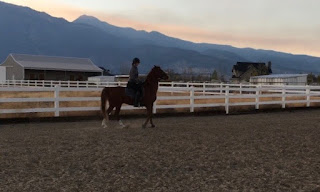 Transition into a giraffe

Previously, if I repeated transitions he would have a total meltdown which was totally counterproductive.  So I mostly ignored them when I was riding and only drilled them from the ground.  This lesson was focused on timing them better.  The timing is a challenge, because after a couple he starts anticipating and it gets more difficult to create good moments in which I can ask. 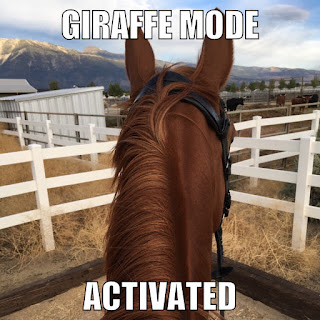 The whole idea is to have him nice and soft and reaching and then gently ask him to step up into the trot.  I struggle with finding the right amount of ask.  He is so sensitive that I keep over asking and surprising him which automatically sends him into giraffe mode.  The best way to ask is to have him walking on a small circle and then very carefully slide into a trot rhythm while asking him to stretch and soften. 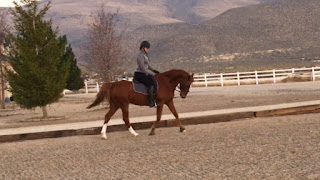 It sounds easy, but it is also a lot to manage.  There was a fair amount of jigging and I started riding backwards (because that always helps), finally trainer got me turning sharper anytime he jigged.  I wasn't allowed to change anything besides turning.  That really helped to smooth things out and we got some good (for us) transitions. 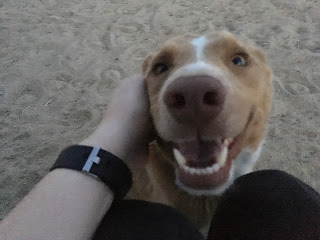 We also started tackling all the ways my body lies.  It is no secret that I have hip issues.  I didn't realize how uneven my hips have gotten.  It used to be that I struggled to open to the right.  Now I basically always have my hips over rotated to the right.  In order to sit evenly I need to think about my left seat bone more which seems to even me out.
Posted by EventingSaddlebredStyle at 1:00 AM