My previous lesson was a bit of a hot mess and in hindsight I decided it was because his right hind was bothering him slightly.  A few days off ran into crap weather which ran into him slamming his hip into the fence(?) and turned into almost two weeks off.  I decided the fastest way to work on his fitness was long trail rides and long lining.  So I didn't ride a ton leading up to my first lesson after trainer got back from her vacation.

I wasn't really sure what to expect from him.  My riding has been rather floppy and not great as I am trying to figure out how to get my hips back to even.  My right hip wants to drop back way too far and my left hip just doesn't want to do much of anything.  The one benefit of having a very sensitive horse is I know immediately when I do get something changed.  For better or for worse he tells me when things are different. 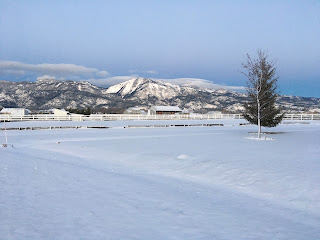 The one day we had snow

He had a bit of a meltdown on the trailer again and came off it really sweaty.  Luckily I had given myself lots of time so I took him on a walk for a bit and then he settled down and ate hay while I regroomed him.  I gave myself time to have about 20 minutes to warmup and he was delighted to see trainer because she immediately started stuffing him with cookies. 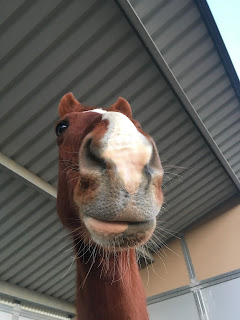 I love his half colored lip

We walked around and I focused on my body and getting him to stretch while she finished up the lesson before me.  He was a little skeptical about the water dripping in the drains and cranked his face towards trainer anytime we were near her (hoping for more cookies).  But overall he was pretty good about going right to work. 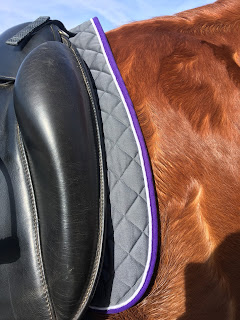 Trainer had us do the typical serpentines and leg yields in and out on the circle help him really stretch into the bridle.  Then we moved up into the trot.  He is slowly getting more consistent in the trot and the transitions, while still pretty sketchy, are showing improvements.  It is tricky getting him to maintain the stretch and not hollow in the transition. 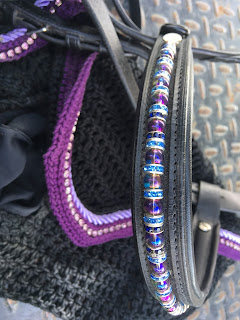 We touched on the canter a little bit.  The left lead was really really good and the down transition was about as good as he can do and the trot he transitioned into was great.  He was pushing behind without any hollowing and stretching forward.  It felt fabulous.  With the right lead I couldn't get my body right and kept flubbing the transition and he was picking up the counter canter.  It was really nice and balanced and no sign of rushing.  After I screwed up three transitions he started getting a little frazzled so we didn't push the subject and called it a day. 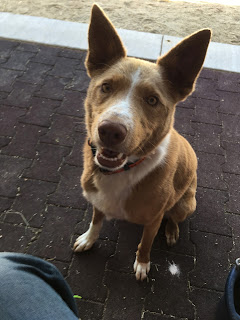 I can't believe how much his ride-ablility has improved.  Hopefully I can get my body lined out sooner rather than later, because he goes so much better when I get myself straight.  Funny how that works.
Posted by EventingSaddlebredStyle at 1:00 AM