What happens when your almost 70 year old (don't tell her that I said her age) mother decides to take a jump lesson?  Pretty much the best thing ever.  Rolex watch out my mom is coming.  First a little bit of background on her.  My mom grew up on a ranch and she spent the majority of her adult life on ranches, so she has ridden pretty much her entire life.  About three years ago, shortly after my dad was diagnosed with Parkinson's, they had to "retire" from ranching. 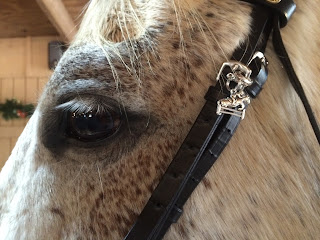 Charlie and his bridle charm

I had been after her for a few years to stop riding the young horses.  Over her lifetime she has racked up quite a few concessions and it has gotten to the point where if a horse bucks or spooks with her, she black out and falls off.  Not a good combination on young horses and why you should wear a helmet.  And no, I didn't wear a helmet until I started riding again a few years ago, but that doesn't make it right.  But I felt bad that when they stopped ranching they got rid of all of the horses.

My mom is like me, she loves riding and her horses.  So last year when they came to visit I thought it would be fun for her to take a lesson and ride.  She took a lesson on Charlie.  This year, I asked if she wanted to take another lesson and she announced that she only wanted to do it if she could ride Charlie and could jump.  I said I would ask S about it.  S agreed and so it was set up.

Her jumping was pretty much the cutest thing ever and Charlie was so good (aka lazy).  They had a blast and I think if my mom could, she would start riding again.  Hopefully, she doesn't announce that she is taking up eventing, because I am pretty sure I would be murdered by my siblings.