This weekend we covered just over 20 miles on the trails and climbed over 2,000 feet (split between two days).  Much to my dismay I still haven't figured out how to make a loop like I want to.  I know it can be done because I have found orange markers on both ends from an endurance ride.

Saturday, we were really close, but ran into some private property and the only options were more up without a decent trail in sight or turn around.  We turned around and went back since we had a time limit for how long we could screw around. 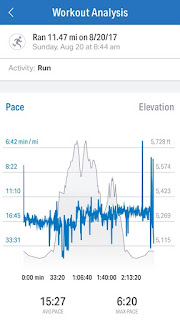 Elevation from the Saturday ride

Sunday, I decided to try and go further into the hills, but I ran into more wild horses and decided to head back.  I don't know the area well enough to try and sneak around them, and I really don't want to get too close to them when I am riding.  Plus there was a lot of squealing going on and possibly a fight (I am super blind and was trying to see from quite a distance). 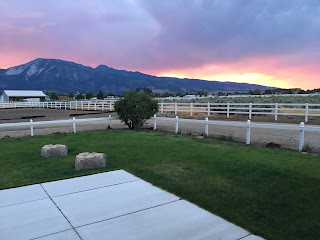 Such a pretty sunset

I wasn't quite ready to head back, so I decided to try another road.  When I was heading out I had seen a truck drive along it, so I thought it might connect around.  After I rode for a little bit I found the truck.  It was very stuck.  The road had washed out (it was super narrow to start with) and they had tried to go across.  They made it barely, but there was another washed out spot.  So they were stuck between the spots and from the looks of the tracks they almost slid off the hill trying to cross the second washed out spot.  They had a second vehicle there so I didn't say anything beyond "Hi."

I kept going for a little further, but once I got around the side of the hill I realized it was going to be quite a ways before I knew for sure that we could loop around.  Since we had already been 8 miles, I didn't want to push him too hard and decided to turn around and explore more next weekend.  When, I came back by the people with the trucks it looked like they had the second vehicle in a not so great position.  So, I asked if they needed anything.  They said "I have a couple more buddies coming."  I rode off giggling to myself and wondering if in an hour they were going to have four vehicles stuck. 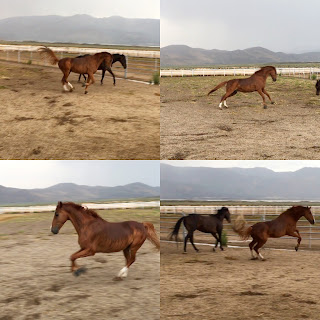 I am absolutely loving having these trails and the ability to get Stinker out and just let him go.  The best part was on the way home we got swarmed with some kind of bug (not the fun part).  I decided to trot to get out of them, because there was a lot of buzzing and he was getting agitated.  He rolled right into the canter, so I let him canter.  He felt great.  I didn't feel his hind end slipping, he didn't spook himself into a bolt, and he promptly came back and went right into the walk when I asked.  Go Stinker!
Posted by EventingSaddlebredStyle at 1:00 AM