While I have been successful in training Stinker, he has also been very successful in training me.  I got so used to frazzled Stinker that just needed me to sit there while he worked things out that I forget to ride.  And I am very hesitant to push and ask for more since I have been there and done that and needed a month to put his brain back in his head and get him to where I could touch his mouth again without a meltdown. 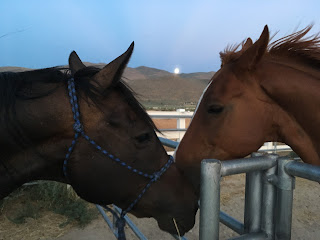 It was almost a super cute picture, but someone can't put his ears up

The new trainer has totally fresh eyes.  She has never seen him lose his brain and just go to panicking and flailing.  So I am trying to trust her (my favorite dressage judge told me numerous times that I needed to forget the past and ride the horse I have) and really push and ask for more.  So far it has been working well for us.  The work isn't ground breaking, but he is steadily improving.

I actually took video of my second lesson since it had been so long since I had watched us go.  And true to form he feels better than he looks, but we don't look terrible.  It is still very inconsistent and the transitions are terrible (aka giraffe mode engaged), but he settles more quickly and I think with time and consistent aids he will figure out the transitions.

Tiny crappy GIF but his walk is improving

I am trying really hard to carry over the push into our rides at home.  I didn't have the greatest ride last night.  He was very reluctant to relax and work over his back and it took me way too long to get him to the place that he needed to be.  But in the end I got him where I wanted him to be and he stayed there.  He wasn't bouncing off the contact because I let my hands get too dead.  I have a tendency to go totally still, which makes him insecure.  He does much better when I have very steady minute movements of my fingers.

Hopefully we will be able to keep improving over the next couple of weeks and trainer will be able to give us another push forward in the next lesson.  I was pleasantly surprised that we didn't work on the exact same things in the two lessons.  They were only a week apart and I felt like I was struggling to recreate the work at home.  Either way, I am very happy with new trainer and I feel very fortunate to have picked her for my first choice.
Posted by EventingSaddlebredStyle at 1:04 AM