So Stinker is still Stinker and his progress is pretty up to date in the video lessons.  That leaves Pongo.  He is currently in the dog house, but more on that later.  He is coming along nicely.  It is still obvious that he is green, but he is slowly getting more consistent.  We haven't done anything that exciting.  Our flat work is mostly walk trot with leg yields.  I haven't been doing much canter.  I have been drained from work and having two ponies in work has been a delicate balance.

This week I had two lessons.  The first one we played in the sand box.  It was quite good.  We had some nice moments and some green moments.  At one point, we were working on one loops at the trot and he decided that meant pop my shoulder and drag for the arena edge.  I gave him a correction which he ignored, so he got popped on the shoulder with the whip.  He promptly gave a very nice and uphill canter transition.  Not what I was going for, but we got things worked out and he remember I was in charge.

The second lesson was jumping.  I realized that I am signed up for a clinic in a month (stadium and cross country with Sinead Halpin) and I haven't jumped in over a month.  Cue freak out.  I am also signed up for 2'0"-2'3", which I know we can do but at the same time if I start thinking about the height I get myself all worked up and anxious.  Anyway, my ankle still isn't 100%.  I would say it is only at about 75%, which isn't good.  I still have limited flexibility and I have started having pain.  Sad Panda, but enough whining.  Back to the jump lesson.  Pongo warmed up nicely.  It took us a couple tries to get the correct leads but that is due to letting his shoulder slip out and I can easily fix it later once he understands the whole bending better.  We took a walk break and S told us to pick up trot and go over a series of ground poles.  Then.... 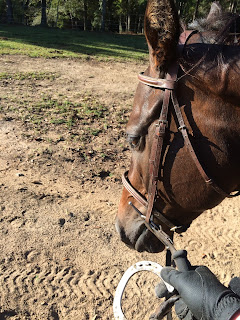 Oh yes the little turkey pulled his shoe!!!  His new bell boots arrived today.  He was wearing the old ones, but they were getting pretty beat up.  And to make it better it is off the foot that is held together with epoxy.  The farrier won't be out until next Tuesday or Wednesday either (bad farrier no beer for you).  The last time he lost this shoe and it wasn't put back on right away he took a week before he was sound again.  Boo.  So hopefully, we will both get sound and can get some jumping in before the clinic so I don't make an ass out of myself.

Posted by EventingSaddlebredStyle at 10:19 PM