This past weekend I was riding in a clinic with a semi-local dressage judge that I absolutely love.  I was originally signed up to ride three lessons, but I realized my ankle was not going to be up for two lessons in one day.  I dropped it back to two and planned to ride Pongo one day and Stinker the other.

Stinker figured out yet another way to get out of work.  I gave him his anti-inflammatory shot on Tuesday (as directed by the vet).  Wednesday while I was at work I got a text saying that Stinker had tied up.  By the time I managed to get out to the barn, his hind end was looking better but his neck was swollen.  The next day he was still a little sore in the hind end but not too bad and it was apparent that the neck was going to be a problem, and I wasn't going to be able to ride him in the clinic. 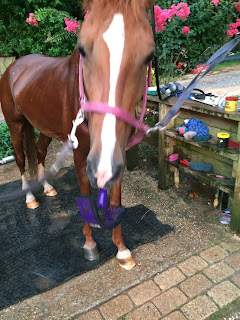 My little Stinker managed to have an inflammatory reaction to an anti-inflammatory... His neck was so sore that it was four days before he could stretch it down to graze.  He was the most pathetic thing ever.  At first we were keeping him and not turning him out.  That was fine until he discovered how to turn on his water hose and flooded the barn.  Plus he was getting really antsy.  So we started turning him out.  While he was happy to run out, once he got to his pasture he became quite sad.  Thursday, he wasn't walking around.  He was just standing with his head sort of droopy looking really sad.  With some coaxing he walked around, so he spent that night in the barn with a hay bag. 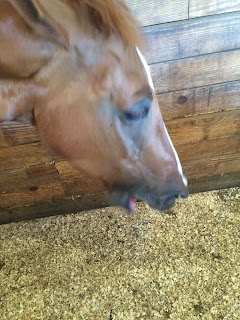 Sunday he could finally graze but his neck was still sore but he was happy to be left out.  Today was the first day I tried to do something with him.  I just lunged him.  To the left (his sticky side) he was a mess.  I had him in side reins, but he was braced and his under neck was bulging.  I never got him to relax and stretch like I wanted.  The right was better, but still not as good as he normally is.  I chalked it up to his neck still being a little sore.  He was wound up in general, but usually he settles better on the lunge than he did today.

It seems like Stinker manages to always hurt himself before a clinic.  The last time this lady was here, he came up with mystery lameness (aka EPM).  D came for a clinic, Stinker was diagnosed with EPM.  The eventing clinic, Stinker was over the EPM, but kept a hitch in his left hind and wasn't ready.  I guess that is the life of the Stinker pony...
Posted by EventingSaddlebredStyle at 9:49 PM