Conformation, Clipping, Blankets, and A Review

I clipped Stinker this past weekend, and like last year I gave him a blanket clip.  I do still need to do some touch ups, because things aren't quite as even as I would like them to be.  I am letting my OCD shine with that one.

Earlier this year I bought some Wahl KM2 clippers.  The barn had a pair of little clippers, but the girls didn't clean them so they stopped working.  I wanted something small enough that I could do touch ups (feet and bridle path because I leave whiskers) but also big enough that I could do the body clipping (I don't ever intend to do a full body clip on him).  These were stocked at our local tack shop and came with a wide blade, so after a month of going in and looking at them I finally broke down and bought them. 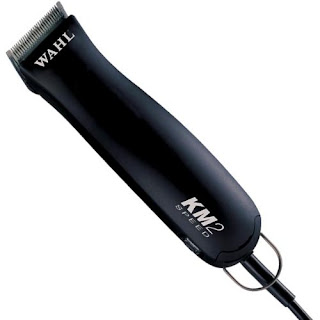 These weren't the easiest clippers to body clip with, but they weren't terrible.  I should have started on his belly since I could fuck that up without anyone being able to see it, but I wasn't that smart and started on his neck.  It took me a few tries to get used to the way they clipped, so his neck looks a little funky.  I am hoping that disappears with time. 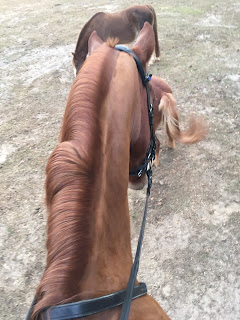 I can't speak to the durability of these clippers yet, because I have only had them about 6 months and have used them a total of four times now.  But overall I am very happy with them.  If I was doing a full body clip or clipping multiple horses I wouldn't want to use them for that, but with my one horse and blanket clip I was fine.  They are light weight and easy to maneuver, so it was a painless task (Stinker also gives zero shits which is super helpful). 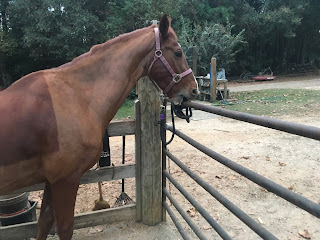 Why stand for conformation pictures when you can chew on your lead rope?

Previously, I posted about my struggles to find a blanket that fits (link here) and I am still on the struggle bus.  As a quick review Smart Pak's high neck blanket (rubs shoulders, their regular blanket rubs (shoulders and neck), Schneider's Storm Shield (rubbed shoulders), Rambo high neck (hung too low despite length being correct), and Amigo (rubbed shoulders and withers).  Also, two different style shoulder guards did not help.  Still with me? 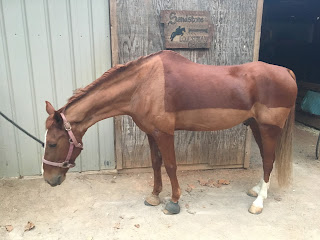 Based on previously recommendations these are the ones that have been suggested and I haven't tried yet:  Schneider's cutback model, Schneider's neck attached model, and Weatherbeeta's.  I think I have at least figured out what is causing the problem.  My theory is the shoulder gussets don't extend up enough to compensate for his front end action.  So the million dollar question (and yes it does feel like a million dollars in blankets) is what do I do?  Do I buy them all and return what I don't think will fit?  Do I say screw you horse your don't need hair?  Has anyone tried a bossy bib shoulder guard?  Does someone make custom blankets/want to trade me a horse that is normal shaped? 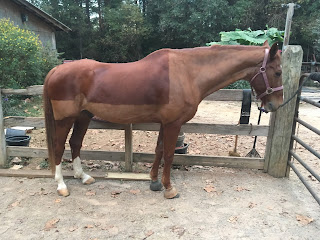 The only semi decent picture I got before I got frustrated and stopped trying
Posted by EventingSaddlebredStyle at 1:00 AM