I have been being lazy and not taking videos of my rides, which has led to a few delusions.  Thankfully, S snapped a couple videos of my lesson yesterday and I got a reality check and a reminder why I need to be diligent about videoing my rides.

Ok, I am not quite that delusional, but I am going to entertainment value here.  The point is we don't look like that.  But before I get to what we do look like, I am going to talk about how I am an idiot and set myself up for failure before my lesson.

We finally got rain on Tuesday, unfortunately it lasted into Wednesday morning which was when I was planning on riding.  So I gave him Wednesday off, which isn't unreasonable.  What I didn't think about is they also switched the horses from night turnout to day turnout, which means Tuesday they were in all day and all night.  Then I was getting on him Thursday morning right as they were turning horses out.  Guess who lost his brain? 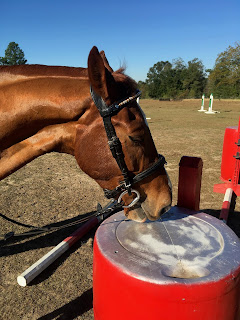 Cute pictures were not happening

Did I mention I am an idiot?  Luckily I had a few brain cells firing, and after him spinning and bucking around the mounting block I decided to walk him up to the stadium field.  There was lots of snorting and prancing on the way up there, but once he got half way up there he started relaxing and walking like a normal horse.  He even stood at the XC jump that I used as a mounting block.

Once I got on, I was surprised.  Yes he was tense, but he felt really good.  Normally he locks the left shoulder, but he was supple to start.  I still kept the normal 15 minutes of walking despite the temptation to just move on (I do have a few brain cells still).  Then we started the trot poles.

He felt really good throughout, but I still need to get him to slow down the front and lift behind.  That is going to take quite a bit of time, but I am finally feeling hopeful about the trot.  I am able to have a discussion with him about the way he moves and he is willing to slow down instead of plowing around at mach speed with legs flying everywhere.  It is a good feeling.