I had grand plans for this weekend.  I was going to get a video and actually have fun media and not fill my posts with headshots of my horse.  Stinker had other plans.  He kindly told me to fuck off on Friday.  I realized I had been drilling him a lot and he might need a few days of brain reinstalling (aka trail rides).

Saturday, I got up before the ass crack of dawn went to work (managed to get done in under 7 hours). Zipped out to the barn, slapped some tack on and decided to do a no stirrups trail ride.  We set off armed with my spider stick (aka a dressage whip because anything shorter is too short).  I immediately questioned my decisions. 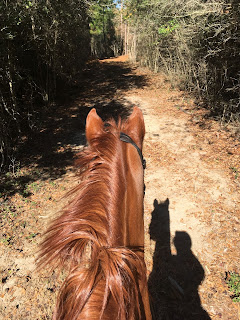 There was a trailer pulled up by the barn and he always gets anxious about mounting out front of the barn.  The combo was too much for his poor little brain and he was off before my butt hit the saddle.  I made him circle and pause back where I was mounting, but he was too wound up to really press the issue.

I took a trail that winds through the trees a lot and then pops out along the back of a neighborhood.  I have not been over there in quite sometime because of spiders.  Luckily we only encountered four large webs and only had one close call.  When we popped out along the back of the neighborhood a dog started barking and poor Stinker lost it a bit. 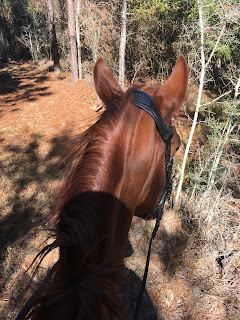 He tried to spin, when I blocked that he started backing up.  I bumped him and he kept backing.  I gave him a boot and felt him bunch up.  At this point I went crap, I am on a narrow path with barbed wire on one side and no stirrups.  Instead of being smart and picking up my stirrups, I gave him another kick and told him forward.  He kicked at my leg and then went forward very reluctantly.

The rest of the ride was pretty crappy, but he kept it together and mostly walked.  It was much bouncier than I would have liked, but it wasn't a true jig.  Once I got him back to the jump field he settled immediately and was happy to walk and stretch like normal.  I really couldn't fault him for being anxious around the neighborhood and after the initial fuss he wasn't bad. 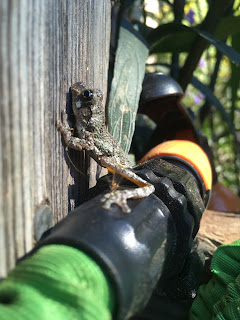 I then hustled over to another barn where a friend was riding in the Hilda Donahue clinic.  Hilda is a very fun and positive teacher.  One of my favorite statements from her was, "half halt don't give him a dental."  I jumped in and was helping set jumps and she asked me if I wanted to come be her working student.  I guess I have a back up plan if science doesn't work out for me.

Sunday, I had the exact same schedule and took Stinker on the same trail ride, with the exception of instead of looping back to the jump field I tried to go back through the woods.  There is one turn I always miss going the back direction.  Luckily, I was smart and turned on map my run right before I got to that spot.  I missed the turn per usual, but was able to wander through the woods and get back on the right trail.  Stinker was less than thrilled with walking through some of the under brush. 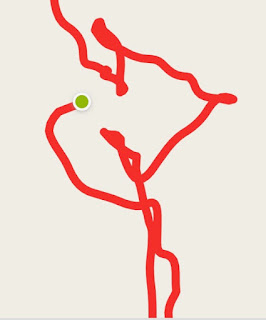 I didn't get anything mind blowing from the clinic, but it did make me feel like I am on the right path with Stinker.  I get a lot of self doubt despite the progress we have made this year, so it was nice to have the feeling that I am doing things correctly (for the most part).  I am sure we will have some holes, but I am confident hope that anything I miss we will be able to fix later.
Posted by EventingSaddlebredStyle at 1:00 AM