Sometimes I forget how much Stinker has matured in the time I have had him (nearly 2.5 years).  The reality is he is not that same horse (thank god).  And while we still have our issues, we have managed to build a very strong partnership and to me that is worth the most. 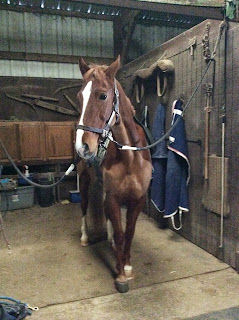 I love knowing that he trusts me enough not to check out when he is scared.  Quite frankly I wouldn't have blamed him if he had high tailed it down the road the other evening with the Christmas lights.  But instead he trusted me and stayed and passed the bike in a reasonable manner.  I use the term reasonable manner because there was much snorting and prancing, but it was totally controllable.  He always dances when he is is nervous (all the better to high tail it out of there if necessary). 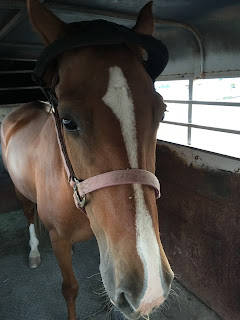 
I feel comfortable taking him out on all the trails.  I used to worry about what would happen if we ran into something scary.  Now I know I can just talk to him, keep my legs on, and ask him to flex.  He will refocus and stay straight and I don't have to worry about him scooting into anything or taking anyone out.  I am not worried about crossing roads, because we can halt without having a total meltdown. 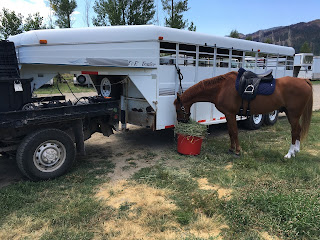 And happily eats in new places

This year Stinker has really found his brain and it has improved his rideability so much.  I can't quite believe that this is the same horse that would have a fit over legs touching him.  When I was riding with the new trainer she asked about our background and goals.  And I realized as I sat there on a loose rein talking to her that I didn't want to influence her opinion of him by telling her we spent 6 months trying to figure out how to walk.  Or that he used to panic and check out.  Instead I said he is quite sensitive and can get frazzled easily and I want to keep him sound for a long as possible. 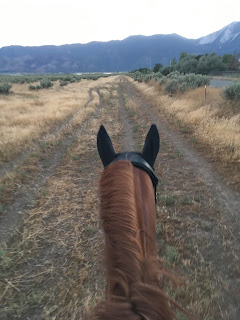 And lets me text and ride

Instead of seeing a hot mess with me freezing and him flailing we had a very nice steady consistent lesson.  There was some flailing in the trot, but for the most part it was inconsistent but quiet.  A few zooms here and there, but nothing that was out of the ordinary or an intro level pair.  The trainer asked about the canter and I said I hadn't been cantering him under saddle because of his weakness, but I was doing transitions on the lunge to help build those muscles.  No pressure to do more, no pulling the "What the hell do I do with these two?" face. 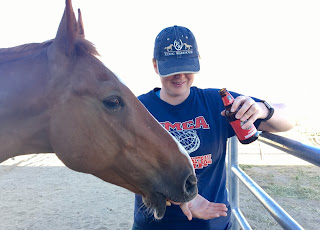 But never stops being a goober (PC SB)

I am really excited to see what comes next for him.  It is still going to be a slow process, because the EPM horses typically take longer to build the muscle.  But I feel like we really have a shot at progressing.  He keeps getting stronger and more correct and despite his wonky hind his gaits are getting back to what they were pre EPM.
Posted by EventingSaddlebredStyle at 1:00 AM