First don't forget about the Olympic Contest!  There are still more prizes than entries, so enter away!

Secondly, I have been struggling to find breeches that I like.  I have several fit problems.  One I am super tall, but I also have hips and a butt.  Apparently most companies assume if you are tall you are also super skinny (ok maybe not super skinny but they stop making longs before they hit my size).  I have a few that I like and a few that failed, so if you have any suggestions fire away.

I have some Kerrits tights that I love and wear all the time, but they only come in black and tan.  I am ok with wearing them in the black, but a girl can only have so many pairs of black tights.  I tried a pair of their full seats and while I liked them they didn't last. 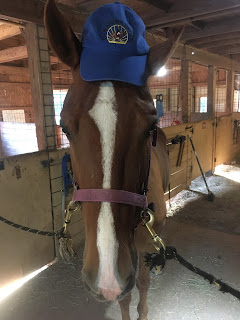 Stinker thinks that I shouldn't be allowed to dress anyone.

I tried the Aztech Diamond breeches, but they aren't wide enough in the hips for me.  I also tried Smartpak Pipers and those were terrible.  I had to size up to a 36 to even get them on and then the waist was so large I can easily fit a fist in them.  I also tried some Goode Rider and they were big fat nopes.

The FITS Free Flex Full Seats are good, but they are a little snugger and leave things more visible than I would prefer.  They are typically the ones that I wear for the video lessons and clinics because they are my only light grey pair.

FITS.  Look fine in the saddle, but a touch snug for my taste.

I recently tried ROMF St. Tropez Full Seats and they are nice, but a little heavy for summer season.  They are also a little snugger in the hips that I like.  I have to do some squats when I first put them on so they stretch and aren't weird when I get in the saddle.  They are also too short for me, but I mostly ignore that. 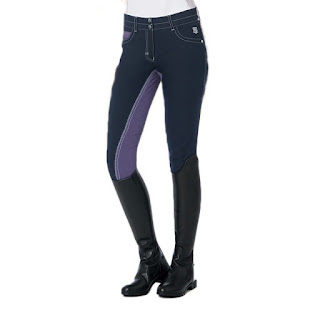 ROMF St. Tropez.  A bit to heavy for the humidity.

If you are hippier, what are your favorite breeches (full seats or knee patch)?  If you aren't what breeches didn't you like because they were too big in the hips?
Posted by EventingSaddlebredStyle at 1:00 AM