A while ago I had a birthday, so of course I got myself a couple of presents.  I got the brow bands from Dark Jewel Designs last week.  And I have been obsessed.  I had intended to wait until I got my fly bonnet and post everything together, but I am too in love with them not to share them now. 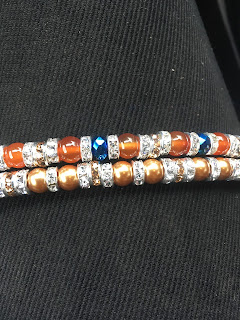 Up Close (Ignore the dirty pants, I'm a mess)

So far they have been lucky charms for me.  I have had some really solid rides on Stinker.  There was the ground pole lesson last week which I already talked about, but I am still really excited about it.  Then Friday and Saturday I rode on the hills with no stirrups.  So far I am up to almost five hours of no stirrup work (sadly I am not in the running for the competition because they added a must walk trot and canter once a week clause). 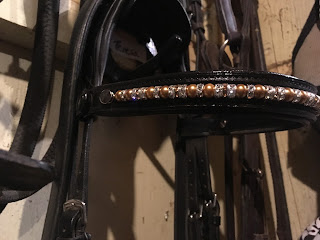 The swap in turn out has made Stinker a bit hot to trot, but he is still trying.  I have been trying to up the amount of trot work, but it hasn't seem to make a difference.  Right now I have him on a one day trot one day walk on the hills schedule and I am trying to mix some canter work in twice a week too.  And he is getting ridden six times a week, darn saddlebred energy. 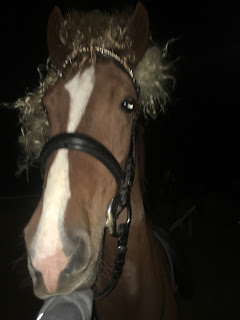 I am still puzzling over the trot work from yesterday.  I was happy because he was really stretching down, but he also felt like he was really on the forehand.  I could still feel his hind and he wasn't dropping it out behind him like he usually does.  But it just wasn't quite right.  I decided not to worry about the on the forehand part and let him figure out the stretching since that is more of a challenge.  Hopefully, it won't come back to bite me in the butt. 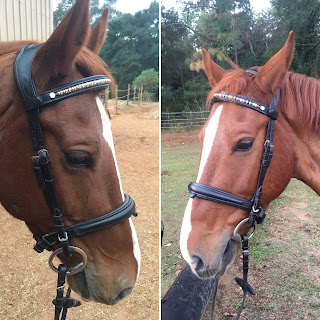 He also gave me some fantastic canter work.  The right lead canter felt bang on.  Of course I don't have video so I don't know if my feeling is totally out of whack or not.  He popped up into the canter (typically it feels more like a rocket launch) was super balanced and listening to my seat instead of just zooming off.  The left was pretty good, but he swapped leads over a ground pole.  I think it was just in the front, but I am not sure.  At any rate I am really pleased with the little Stinker pony and our shiny new lucky charms.
Posted by EventingSaddlebredStyle at 1:00 AM