I took Friday off and turned it into a pony day.  I was suppose to adult and I did minimally, but it was a pretty awesome day.

First up I had a lesson and I got to ride S's mare.  I adore this horse.  She is a big (16.3) leggy OTTB. Last year they did a one star, but this year has been plagued with minor health issues that has kept them from being in top form.  Not to mention she has anhidrosis so the summer is rough.  Anyway, the point of the lesson was for me to loosen her up and for S to see her go.  It was a really good ride and I got to ride a well trained horse for a change and fine tune my aids a bit.  I also got a reminder of the go button.  Stinker doesn't typically need that button so it gets a little rusty for me.

We took this quality video.

After my lesson, I did some ground work with Stinker.  I wanted to lunge him to see how he was going (the vet was out today and I wanted to either increase or decrease my paranoia before he came).  I also wanted to play with backing.  D wants me to start working that under saddle but it tends to frazzle Stinker.  My plan is to get him to back totally off voice commands then have him start to back under saddle when I have a ground person and progress from there. 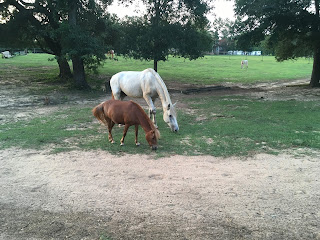 This picture makes me giggle.  Rosie is the evil mini and Paddy is an Irish Sport Horse.

The most amusing part of lunging was when he got sassy and tried to buck.  I say tried, because he really doesn't know how to buck.  After a few jumps, he trotted off and was so proud of himself, which made me laugh even harder.  I really wish I had a video of it, because then I would shame on the internet.  I did actually get some trot video (I lack skills to lunge and video very well but it exists).

I hung out at the barn most of the morning, but decided to leave before the vet arrived.  My logic was that every time I see him my wallet empties itself, so I figured I would spare myself that pain.  I then went home to "clean and work on job applications" and ended up sitting on my couch and playing on the internet.  Oops...oh well.  It was just what I needed.
Posted by EventingSaddlebredStyle at 7:32 AM