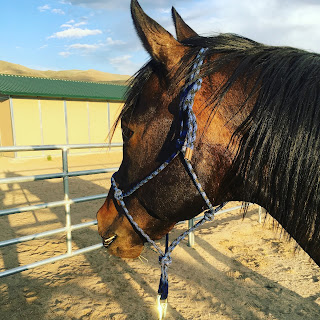 Last week I finally found a buddy for Stinker.  I wanted an older horse that my mom could ride, but not so old she would be bored to death.  A lot of the horses I was interested in were sold.  We went and tried one together and neither of us really liked him.  He sounded good on paper (dressage training and had done quite a bit), but it just wasn't a good fit.

Luckily I happened to see Cowboy on Facebook and I snapped him up despite a less than stellar test ride.  He never did anything naughty, but he was tossing his head a lot and very inconsistent in rating his gaits.  But he walked, trotted, and cantered and felt good.  I never got a feeling like he was about to explode, he just seemed unhappy with something that day.  My mom wasn't able to come see him, so he was a surprise when I brought him home. 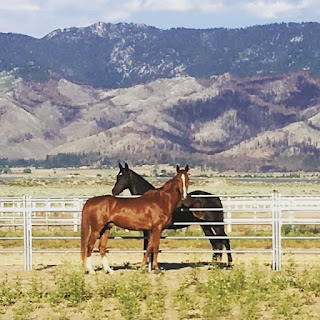 There has been minimal squealing/mare face *Stinker*

Cowboy is a 16 year old OTTB.  He was used on a dude string at one point but was very underweight when he was sold off.  He bounced a little bit and had some light riding but for the last two years he hadn't been used.  When it was decided that he was going to be sold he had about 4-5 rides on him before I tried him.

The first day I rode him at home, I was wondering what I had bought.  But with some tack changes he happily went to work.  Right now I am riding him in a hackamore (I impulsed borrowed/bought/stole from Aimee) with my dressage saddle.  Hopefully, we will be able to get another saddle that will fit him better than any of the ones we have. 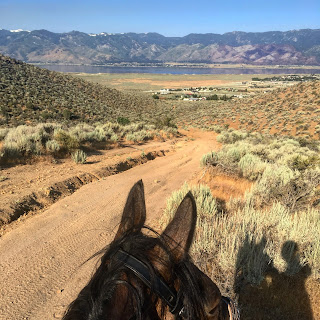 Ever since getting the tack correct he has been a blast to ride.  Right now I am mostly walking him on the trails to get him back into the swing of work and to learn more about him.  My mom might have trouble getting me to turn him over to her, because he is such a fun ride.
Posted by EventingSaddlebredStyle at 1:00 AM