Lest you think that Stinker has been forgotten, rest assured that I have not turned him into the redheaded stepchild since Cowboy's arrival.  Stinker has settled in nicely and was working well after a little time off because of the travel.  Nothing was ground breaking but it was very steady consistent work reflective of where he is at. 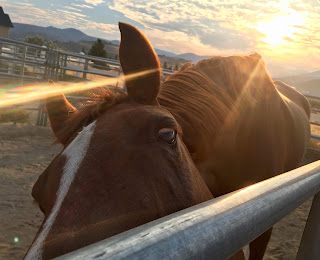 Then I went back to Wyoming, and when I came back he was three legged lame.  Like totally pathetic limited mobility OMG my horse is broken lame.  His hind shoe is loose and it looked like maybe he had a nail that was poking him.  I contacted a farrier (who is coming this morning) and I am hoping that it is from the loose shoe/an abscess.  Either way he totally spoiled my grand weekend plans, but it was still a fun weekend despite his failure to cooperate.
Posted by EventingSaddlebredStyle at 1:00 AM