There was a fair amount of time spent grooming and playing dress up with the ponies even if we couldn't ride them.  Cowboy got his first bath and we tackled his mane and tail.  He turned out very spiffy.  It was also discovered that even though Brownie didn't fit Stinker (sob) it looked smashing on Cowboy. 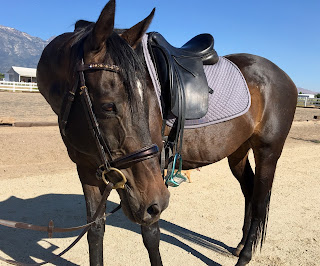 All pictures by SB (because mine are crap)

We took my mom saddle shopping because her saddle that she has used since she was 17ish didn't fit Cowboy.  I should have bought her a quarter horse instead of an OTTB.  We have one possibility on trial, so hopefully it will work out for her.  SB was a very good sport about my family's shenanigans (at least I think she was hopefully she will come back again). 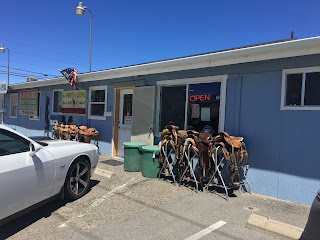 More dress up happened and more damage to my wallet.  I might have spent my tack room organizing budget on pretties from SB #noregrets.  SB, wanted to organize the tack room until I informed her that we could buy stuff for it or she could leave pretties and take all my money.  The girl isn't dumb so that was the last I heard about the tack room. 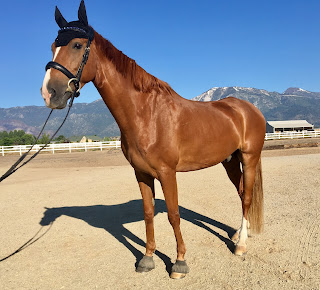 Then we went and played tourist.  First we went to Virginia City and had a very disappointing trip to a cidery.  We both thought that they made their own cider so we stopped in after we had eaten lunch, but sadly they didn't. 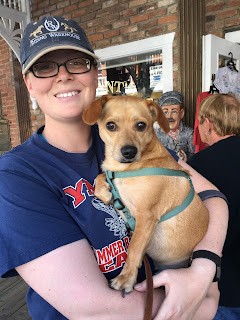 I steal the Teeny

After that SB wanted to go on a ghost tour, but I said we would either waste our money or she would have been carrying Teeny and me so we passed.  Mostly because I distracted her with ice-cream.  I got the ice cream while she waited with Teeny and he stole ice cream from some ladies.  Teeny was a massive hit with people, but I don't think the people were such a massive hit with Teeny unless they gave him ice cream.  After that, we were hot and SB decided she wanted to see snow. 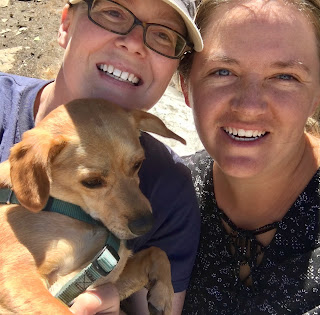 I haven't actually done much exploring, so I didn't know if we could get to where the snow was on the mountains but I was game for trying.  So off we went in search of snow in July.  We did find some at the top of the mountain and I decided it would be fun to go down the other side and see Tahoe since I have never been.  We tried stopping at several spots to get a good picture but they weren't quite cutting it.  Finally we got to one that was wide open and really really pretty, but people were being dumb and hanging off the edge and climbing on shit.  So we snapped a couple quick pictures and left before someone died. 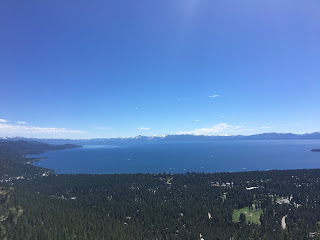 Our original plan was to stop along the lake so we could dip our toes in.  At first there was a fairly impressive drop off to the lake, then there were a shit ton of people and then I was over people and didn't really want to go (luckily SB said she agreed with me) so we went and found a Sonic instead.  After that we went home to play with ponies again, and she got some hysterical pictures of Stinker being his usual goobery self.
SaveSave
Posted by EventingSaddlebredStyle at 1:00 AM